Therefore a man shall leave his father and mother and hold fast to his wife, and the two shall become one flesh. So they are no longer two but one flesh.

The covenant of marriage is one of the most significant relationships in the world, as it points to the heart of God and his unfailing love for his own people. 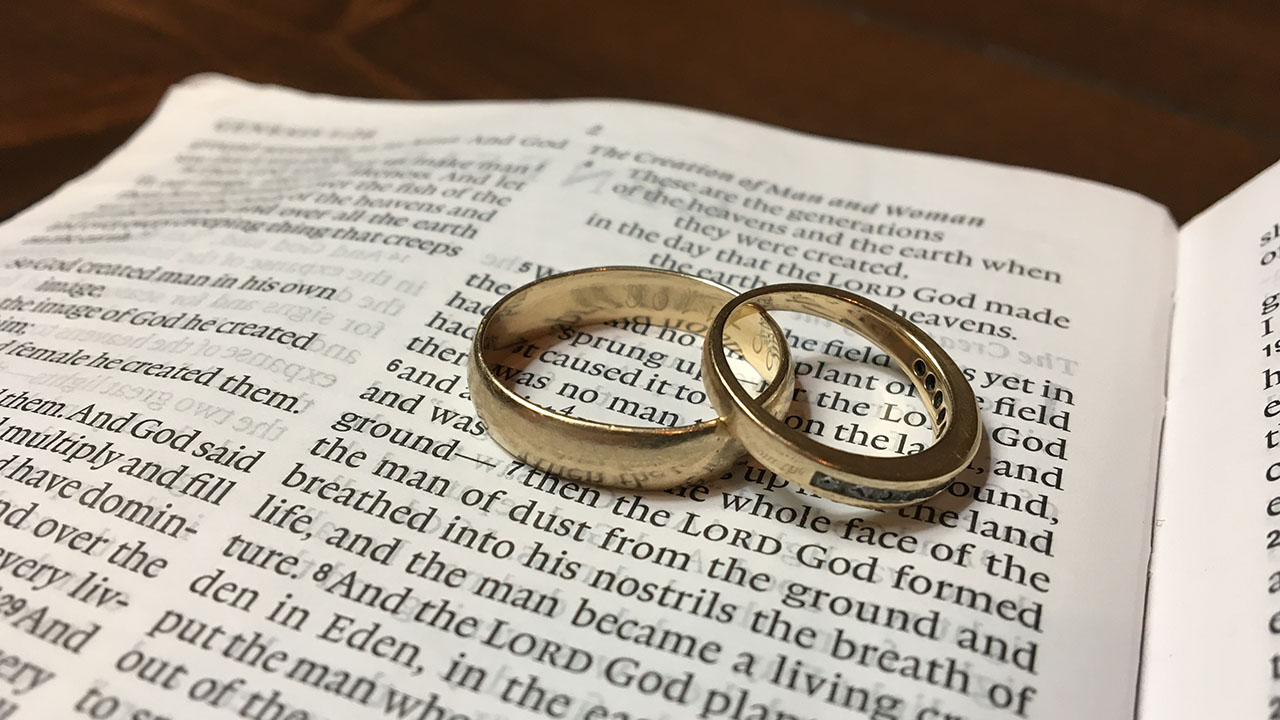 Marriage exists ultimately for one purpose: the glory of Jesus Christ. Although there are other important and essential purposes for marriage—such as family and community—at the center is the bridegroom, Christ Jesus, and his bride, the church (Ephesians 5:31-32). Pressing even deeper, the act of marriage points to the heart of redemptive history, that Christ died to sanctify his people with his own blood (Ephesians 5:25-27). Thus, marriage is a visible and tangible parable of the gospel of Jesus Christ. Without this fundamental meaning, the God-given basis of marriage ceases to exist. For Risen Hope, the definition of marriage that points to Christ and his people is not something novel, fabricated by first-century Christians to romanticize their worldview, but rather it is the foundational framework for understanding marriage, regardless of time or cultural invention.

When Adam was first created, he had alone been given the command to protect and provide for those who came after (Genesis 2:15-17), something that applied most immediately to Eve, whom he was given as a friend and partner (Genesis 2:22). Adam and Eve were both created in the image of God and both blessed by God (Genesis 1:27-28), giving her a profound equality shared with Adam that no other creature shared, which is why Adam says of Eve: “This at last is bone of my bones and flesh of my flesh” (Genesis 2:23). Despite this equality, God had assigned to them each distinctive and exclusive roles: Adam’s role was to sacrificially protect his wife through servant leadership and Eve’s was to graciously help through partnership. These roles provide a lens through which we can understand the functional innerworkings of marriage set against a backdrop of radical unity.

The first marriage was depicted as something utterly unique, a union that is unparalleled in all creation and referred to by God as a union of “one flesh.” Genesis 2:24 says that “a man shall leave his father and his mother and hold fast to his wife, and they shall become one flesh,” which provides us with the biblical understanding of the act of marriage, something Jesus Christ affirmed in Matthew 19:4-6. In fact, Jesus says that this understanding was given directly by God: “he who created them from the beginning made them male and female.” In marriage, Jesus says, “[t]hey are no longer two but one flesh. What therefore God has joined together, let not man separate.” In this passage, Jesus specifically denounced divorce outside of a provision for sexual immorality, yet he said even more than this: Jesus explained that the male-female complementarity that is observed throughout all humankind isn’t insignificant. It exists for the purpose of marriage and, more importantly, for the story that marriage is ultimately telling.

Although Adam is the first man, he is not the first husband. God describes himself as a husband of the people of Israel throughout the Old Testament (Isaiah 54:5; Hosea 2:16). This fact shows how deeply rooted the practical expression of marriage is in the eternal God and his love for humanity, and more specifically his own people. Adam and Eve’s relationship not only led to the Fall; it also displayed the same sin that affects all humanity. Adam listened to his wife instead of obeying God and became the portal through which all sin and death entered the cosmos (Romans 5:12-21). Where Adam was to protect his wife, he failed, allowing her to become infected by the deceitfulness of sin before himself succumbing to it. The rift created by these actions represents the first divorce, which not only rent the universe in two, but separated man from Maker (Genesis 3:24; Romans 8:20). Even more so, our first parents’ idolatry (delighting in anything over God) was a voluntary act of adultery directed toward God, the ultimate Bridegroom. It was from this single act that every manner of sexual immorality (namely, any sexual activity outside the marriage union between a man and woman) has been inherited by man, all being tragic echoes of this same spiritual adultery (Romans 1:26-32).

The only solution to this cataclysm was for God to pursue his bride—his own people—and to do whatever it took to get them back. Though they did not deserve him and though he would have been completely just to sentence them to an eternity of separation from any joy and peace found in him, he took the form of a servant and clothed himself in human flesh as Christ Jesus (Philippians 2:6-8). Then in order pay for the sins of his people, he bore their punishment on the cross, reversing the trauma that entered the cosmos through the actions of Adam and Eve (Colossians 1:19-20). Unlike Adam, when given the opportunity to listen to the deceitfulness of sin, Jesus refused (Matthew 4:1-11; 16:21-23), choosing to obey God and becoming the portal through which all righteousness and life could return to mankind (Romans 5:12-21). Where Adam failed to protect Eve, Christ gave his life for the sake of his bride, taking on her sinfulness so that he might secure for her freedom from sin (Ephesians 5:25-27). This bride is the church—the people of God.

In Ephesians 5:22-33, Paul enumerates how wives and husbands should interact in the context of marriage: the wife should trust God and graciously submit to her husband’s weighty responsibility of leadership, while the husband should give his life every day for the protection and spiritual growth of his wife, an act of sacrificial love that points to Christ. This principle of functional roles in the marriage union did not come into being de novo, but is a reversal of the failure of the first parents and a vivid dramatization of Christ’s love and care for his own bride, the church: “Husbands, love your wives, as Christ loved the church and gave himself up for her, that he might sanctify her, having cleansed her by the washing of water with the word, so that he might present the church to himself in splendor, without spot or wrinkle or any such thing, that she might be holy and without blemish.” The church is the work of Christ’s sacrificial love, and his marriage to her is an eternal reality, whereas a human marriage, though profoundly important to people and community, is most importantly a pointer back to Jesus.

And while marriage is significant in this role, it is not necessary for the believer. Scripture states that those given the gift of singleness are freed from the worries of life and made able to be completely devoted to Christ (1 Corinthians 7:6-9; 25-35). They will—with all believers—participate in the eternal marriage between Christ and his church (Revelation 19:6-9). In other words, being single in this life is not a lack of the substance of marriage, only of the shadow: those who are single and completely devoted to the Lord Jesus Christ in this life taste the eternal marriage with greater clarity, not clouded by divided interests and worldly things.

Husbands and wives are ontologically equal as image bearers of God (Genesis 1:27), and they are co-heirs of the grace of life (1 Peter 3:7), being united in Christ Jesus (Galatians 3:28). Furthermore, in marriage they have become one flesh, which points to the union of Christ and his church, as well as its price (2 Corinthians 5:18-21). In the age to come, Jesus says that human marriage will no longer take place (Mark 12:25; Luke 20:34-36) because it will have served its purpose: to point toward him and his pursuit of his people. The church—the bride of Christ, also called new Jerusalem (Revelation 21:2, 9-21)—will be “coming down out of heaven from God, prepared as a bride adorned for her husband.” All history is flowing to the point where God is reunited with humanity because of the work of Christ on the cross (2 Corinthians 6:16-18; Revelation 21:3-4), where he ransomed his bride from sin and death. This reunion is called “the marriage supper of the Lamb” (Revelation 19:6-9). Human history began with a marriage ruined by the Fall, but it will close with a fully reconciled marriage—between God and man—purchased by the matchless and precious blood of Christ (1 Peter 1:18-19).